As a culture and management consultant, I work in an advisory capacity with global managers and global firms expanding into Africa. Thus, the current conflict in the West African naon of Ivory Coast – the world’s largest producer of cocoa – is of parcular concern and one I feel warrants a deeper look from both a global and cultural perspecve.

A decade ago, the Ivory Coast was seen as a haven of peace and prosperity in the West Africa region. Today, however, the nation is suffering from chaos and confusion following a recent (Dec. 2010) disputed election which resulted in both of the main candidates –Laurent Gbagbo (incumbent president) and Alassane
Ouattara (opposition candidate) – being sworn in as president.

To the casual observer, the election looks like a classic case of an African incumbent refusing to step down after losing an election. There is little doubt, however, that in this election, the spectre of ‘tribalism’ (a common misnomer for ethnic identity or ethnic nationalism) has raised its head once again as one of the major complicating factors in the nation’s politics. 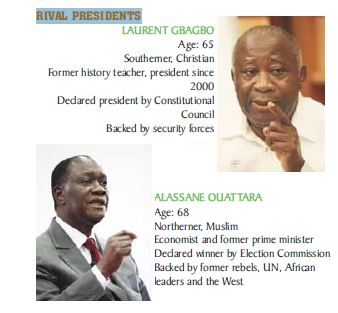 THE UN TROOPS IN IVORY COAST

Western explanations of local issues in African countries frequently ignore the influence of cultural or traditional ethnic structures. By disregarding the influence of ethnic institutions and systems, international organizations weaken their dialogue in diplomatic negotiations, businesses weaken their potential financially, and even teachers weaken their effect academically, and the list goes on. Even today, it is not out of the ordinary for an African to identify more closely as a member of a given ethnic or linguistic group than as a member of the nation in which they were born and hold citizenship. For instance, a Zulu is more of a Zulu than he or she is a citizen of South Africa; and, on paper, a citizen of Rwanda may be Rwandese, but their identity is still primarily determined by Hutu or Tutsi. These present day attitudes have more to do with prior histories of national governments.

In the 19th century, when colonial powers scrambled for domination in Africa, they partitioned the continent without any regard for ethnic, cultural or religious considerations. As a result, European-drawn borders created “artificial” states within arbitrary and illogical boundaries. Placing ethnic groups with a history of mutual hostilities together in a single country (as in Chad or Sudan), contributed to years of civil war and deep-rooted ethnic sentiments that linger on today.

Because colonialism squashed ethnic groups into large countries or divided them across borders, there has always been a natural tendency for people of ethnic groups to seek self-actualization and self-determination, often to preserve of their own social and traditional structures. The Ashanti people of Ghana, for example, have maintained the institution of the Asantehene (King), their paramount chief and historical monarch. In Western societies, the struggle for self-determination or national identity would be described as nationalism. In Africa and other non-Western societies, the same desire is ominously referred to as “tribalism”.

Prior to independence, the colonial power was the common enemy. After independence, however, when the Europeans took leave, ethnic groups in many African states were forced to confront one another for leadership roles. With ethnic allegiance far surpassing national identity in many African nations, dishonest leaders seeking to exploit audiences for personal and political gain, have often played up their ‘ethnic card’ to garner support, trust and ultimately, to win votes. 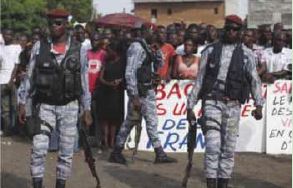 This brings us back to the situation in Ivory Coast, where many observers see this as the case today. Incumbent president, Laurent Gbagbo has been in power since 2000 and had already overstayed his mandate by five years when the long-delayed presidential election was finally held in October. The vote was intended to help reunify the country, which was divided by the 2002-2003 civil war between a rebel-controlled north and a loyalist south.

“With the backing of the military and some southern ethnic groups and elites, Mr. Gbagbo is using the country’s Constitutional Council, to cling to power,” writes journalist Kofi Akosah-Sarpong . This is in spite of the fact that he was defeated by the opposition candidate, Mr. Alassane Ouattara, on December 2, 2010. The Constitutional Council, headed by a Gbagbo ally, agreed and annulled the votes from the north, leaving Mr. Gbagbo with a slender overall majority.

Under the surface, Ivory Coast has long been deeply divided along ethnic, religious and economic lines. Laurent Gbagbo is from the Bete ethnic group. Alassane Ouattara is from the Dioula ethnic group. Gbagbo and his associates from the south see Ouattara and his group from the north as “foreigners” or immigrants in their midst.

The nation’s thriving cocoa industry has created one of the highest living standards in the West African region, so people from neighboring countries, such as Mali and Burkina Faso, migrated there to earn their living and benefit from the thriving economy. Some of these people shared ethnic ties to those living in northern Ivory Coast and like them were mostly Muslim. Some southerners, encouraged by populist politicians, began to resent the influx and demanded action to protect the country’s “Ivoirite (Ivorian-ness)”.

After being portrayed as not being real Ivoirians, northerners started to complain that they were being discriminated against. Mr. Ouattara, a Muslim, who was a former Prime Minister, is a prime example. He was banned from standing for president in previous elections because it was said his parents came from Burkina Faso. Similarly, many northerners said they were being refused national identity cards and the right to vote. Laurent Gbagbo, 65, looks down on the likes of Ouattara, 68, whom he and others see as less of an Ivoirian because of his ethnic background.

Africans are no different from other national groups in owing their primary allegiances to those who share their own language, religion and culture. But 50 years after achieving independence from European colonial powers, Africans can no longer afford to live in the past. This warped mentality of ethnic discrimination, based on the belief that one group is superior to another, is not only self-destructive, but self-defeating. And the legacy can only be wars, genocide and other systems of structured hate.

THE WAY FORWARD: A BUSINESS PERSPECTIVE

Ultimately, Africa’s future rests in the hands of Africans. With recovery in Western economies still looking fragile from the global economic crisis, there is a growing appetite to invest in Africa. To off-set weak returns in Western domestic markets, global economies are increasingly looking to Africa for economic growth and investment opportunities. African economies could potentially have the upper hand. An implosion, however, in any African state could be detrimental and have far reaching effects and dire consequences for attracting international trading partners and private-sector investments. To avoid this, African leaders have to set the example by being less tolerant of internal strife based on age-old differences, which only stifle development, and redirect national efforts toward paving the way for sustained economic growth, job creation, and infrastructural development. The time is now for Africans to set the rules of engagement with the rest of the world and take full advantage of the huge, untapped market they collectively represent. WAM

Columnist, Erika Amoako-Agyei, is an international business consultant and the owner and founder of a computer hardware and software consultancy that provides IT and business planning services to corporate clients in West Africa’s mining industry. She is based in the US and provides cross cultural management and communications training to global firms and expatriate professionals entering into Africa. She keeps a blog at www.AfricaBusinessReview.net . She can be reached by email at: erikaagyei@gmail.com.