A Touch Bearer and a Model for African Women in Leadership.

As our tradition, Western Africa Magazine’s (WAM) search for a deserving personality for the Women’s Forum of this edition took us to Liberia and Washington USA, to the doorsteps of Dr Dawn Cooper Barnes, the wife of H. E. Nathaniel Barnes the out going Ambassador of Liberia to Washington and a presidential candidate leading the Liberia Destiny Party for the Liberian presidential election scheduled for October 2011. We take the pleasure of introducing to you Dr Dawn Cooper Barnes

Dawn Cooper Barnes, Ph.D., is an experienced advocate for arts and culture as well as women and children’s welfare. She was a professor of arts, humanities and mass media at various American institutions of higher education. She was a television and film producer as well as a professional dancer, choreographer and performing arts director.

Dawn Cooper Barnes is no stranger to personal hardship or the harsh realities of a war-torn homeland — though she has turned obstacles into opportunity and celebrates life with an energy and resilience that would surprise many people. It’s equally surprising how she even has the time for any of it. She is the wife of Liberian Ambassador M. Nathaniel Barnes and the mother of six children — including a 19- year-old autistic son and a 7-year-old daughter adopted from a Liberian orphanage.

She is also president of the newly reorganized Spouses of African Ambassadors Association and a major supporter of the Autism Community of Africa — and she hopes to start a similar organization to help autistic children and their families in Liberia. Meanwhile, as the ambassador’s wife, she relishes the opportunity to promote the unique bond her African nation shares with the United States.

Residing in Washington, D.C. since October 2008 when her husband presented his credentials to President George W. Bush, Dawn was President of a dynamic organization, Spouses of African Ambassadors Association (SAAA); Recording Secretary for International Neighbors Club 1 (a social and cultural organization comprised of diplomatic, congressional and military officer spouses); a member of the Advisory Board of T.H.I.S. for Diplomats (an organization dedicated to extending hospitality to Washington’s diplomatic families) and an active participant in the diplomatic groups associated with the National Prayer Breakfast and Christian Embassy. A member of an international organization, African Diaspora Foundation, Advisory Board member of The International College of New Media, Dawn is also a dedicated Spokesperson for a new organization, Autism Society of Africa, and she has recently joined the Board of the African Women Association of Cancer Awareness.

Dawn and her husband are also Honorary Board Members of the African Art Museum of Maryland located in Columbia, Maryland. Dawn has a B.A. degree in Theater from the University of Michigan, Ann Arbor; an M.A. degree in Theater from Hunter College, City University of New York; and a Ph.D. degree in film taught at Howard Community College in Columbia, Maryland, where she was Associate Professor of Performing Arts. During her tenure at Howard Community College she founded and directed Aurora Dance Company and appeared regularly on Howard’s cable television station as host of the program “On Location.”

After living in the United States for many years during the Liberian crisis, Dawn joined her husband in their native Liberia in 2000 to help in the attempt to re-build a war-ravaged, impoverished nation. They established Aurora Foundation, an organization which actively supports orphanages, schools, hospitals and women’s empowerment projects in Liberia.

She has written, directed and produced several films including: CRY OF THE PEPPERBIRD: A STORY OF LIBERIA (2000); THE SPIRITUAL NATURE OF AFRICAN DANCE (2001) and CHILDREN OF GOLD (2002). She also produced a Liberian television comedy series entitled WE ON IT! (2001-2003).

With the election of President Ellen Johnson Sirleaf in 2005, Dawn and her husband returned to the U.S. in 2006 where Nathaniel was appointed Ambassador and Permanent Representative from Liberia to the United Nations (New York) from 2006 to 2008. Beginning in 2007 Dawn was President of the United Nations African Ambassadors’ Spouses Group and a member of the executive board of the United Nations African Mothers Association (UNAMA). She also chaired the international committee to re-vitalize Liberia’s National Archives, Museum and Library. Currently, Dawn is Managing Director of Liberia Renaissance Foundation, an American nonprofit corporation she co founded with her husband in 2007, to raise awareness and present opportunities for philanthropy and investment in Liberia.

“Most people don’t know that Liberia is part of American history,” she began. “America’s founding fathers are ours too. Thomas Jefferson, Francis Scott Key and George Washington’s nephew, Bushrod Washington, were all members of the American Colonization Society, whose purpose in the early 1820s was to find a place for free blacks, away from American soil,” she explained of the West African nation, where thousands of freed slaves from the United States resettled, culminating in the Republic of Liberia’s declaration of independence on July 26, 1847. 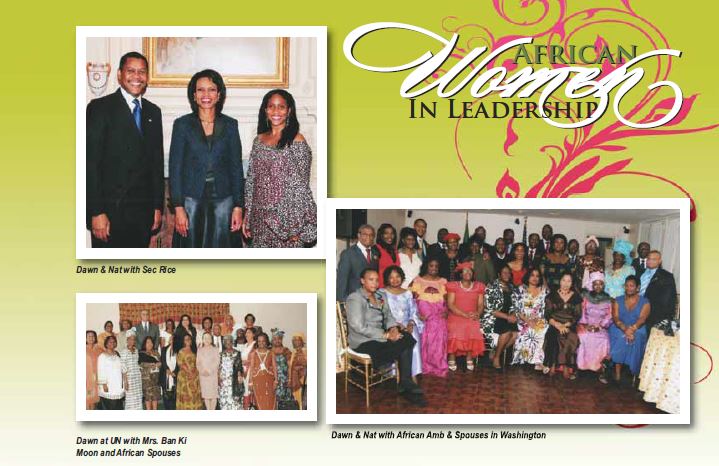 Despite the promise of a “land of the free,” the presence of these Americo-Liberian settlers, as they were often called, was not free of controversy. “It’s not surprising that our country had trouble from the beginning,” Dawn said. “There was a big cultural clash between the indigenous people from 16 different tribes who were the obvious majority and the settlers, who arrived with Western thoughts, Christian religion and higher literacy. Immediately, the settlers began to dominate, which led to mutual mistrust and misunderstanding between the two distinct groups.”

After decades of political tensions whereby the Americo- Liberian elite monopolized political power and restricted the voting rights of the indigenous population, full-scale violence finally broke out. There was a bloody coup d’état in 1980, followed by a devastating civil war in 1989 that lasted for seven years and took the lives of more than 200,000 people. Life didn’t improve much for Liberians under the subsequent regime of President Charles Taylor until international pressure removed him from power in 2003.

Dawn is candid about Liberia’s troubles but wants everyone to know that despite more than 20 years of bloodshed and civil unrest, her homeland has also had some very proud moments in history. The first independent republic in colonial Africa, Liberia is now governed by Ellen Johnson-Sirleaf, a widely respected economist and Africa’s first democratically elected female head of state. Dawn noted that Liberia, an original member of the United Nations, also cast the deciding vote to bring the state of Israel into existence and was an early opponent of apartheid in South Africa.

Today, the country is making tangible strides in reducing poverty and rebuilding from decades of conflict.

Dawn’s life with her family has been intimately shaped by the twists and turns of Liberia’s tumultuous journey over the years.

“My husband and I grew up in Liberia but came to America to go to college and then returned home to be married and raise a family. Nat and I always knew each other. We grew up in the same small community in our capital city of Monrovia. His mother taught at my elementary school and my father was their family doctor,” Dawn recalled. “We first left Liberia as a family after the 1980 coup to live in Nashville, Tennessee, where my husband became a Nortel executive.” 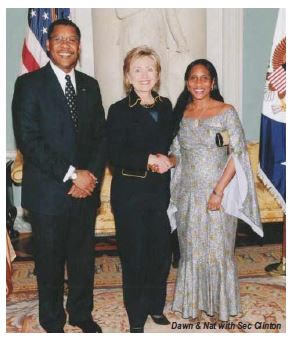 While in Maryland, she gave birth to their fifth child, Zwannah, who was later diagnosed with autism. “At first, I prayed that he would overcome this developmental disorder. Then I realized that there is nothing wrong with Zwannah, but with us. We are fortunate in having him in our family. We are all more sensitive because of him; my other children are much more caring with others because of his disabilities. When we go on family vacations, we assign duties and take turns caring for him on different days. Our family is much more closely bonded because of Zwannah,” Dawn explained.
WAM.